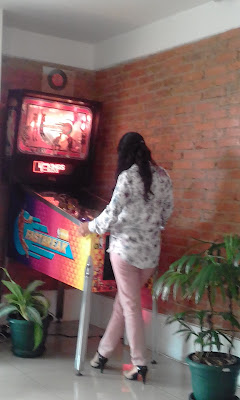 NBA Fastbreak is the latest release from WMS and the George Gomez design team. I love Gomez's previous games, Corvette and Johnny Mnemonic, and was eagerly awaiting his next game. I'm a trifle disappointed in NBA Fastbreak, but then again I like his former games more than the r.g.p consensus.

It's still an outstanding game. It's "different" in several ways. The scoring is like the Real NBA, meaning that 300 points is a terrific score. The scoring is balanced, and completely linear. That in itself is a major difference.

Gameplay can be very slow (stop-and-go) due to the top saucers. This turned me off at first but I've gotten used to it.

NBA FB is probably a "novice" game, because the shots are all very easy, and it's a lot easier to do something that lets you enter your initials. It should still be fun for wizards, if you don't mind "working" at a game (meaning dealing with slow play and very few "pressure" shots). Extra Balls are easy; it's not difficult to go from 3 to 5 or 6 balls.

The ideal environment for NBA FB is probably where I play it: a college bar that is filled with people at night to play with /against and to have as spectators. Also, having a lively environment substitutes for the frequent slow / "automatic" play.

NBA FB is very well made in every respect (other than possibly the bumpers, but I have only 1 machine to base my opinions on that on). It's yet another reminder of how many light years WMS is ahead of Sega in sheer quality, from mechanics to rules to sound (not dots :). It deserves to be a big winner for them.

The objective of NBA Fastbreak is to get to Trophy Multiball by completing the 6 Tasks, win a Ring, and score as many points as possible along the way. Then do it again.

Playfield Here's the playfield and what shots do in one-ball, non-mode play...

There are five major shots. They're all easy:

loops up and around a very shallow ramp and back to the Right Inlane. Starts In The Paint when lit. If In The Paint isn't lit, the Alley-Oop Combo is lit and is started here. Weak shots fall into the Basket Area. Left Ramp

a short mid-field ramp that usually curves around to feed the Left Inlane, like the one on Scrawny Bubonic. There's a diverter that can be raised to let the ball ramp up to the top of the playfield and around to the Basket. This is a killer shot and my favorite shot in the game :). Can be lit for a 3-point basket. If 3-point is not lit, Fastbreak Combo is lit to start here. Center Ramp

dead center in the playfield. A lot easier from a caught ball than a live one. Leads to the Basket. A miss here (you make it halfway up the ramp and then back down) is the main drain shot in the game. Thus, I shoot this from caught balls if possible. Can be lit for a 3-point basket. If nothing else is lit, Free Throw is lit for 1 point (this is true in all modes and MBs). Right Ramp

a short mid-field ramp that feeds the Right Inlane. Starts both Fastbreak Combo and Slamdunk Combo. For me, this shot is harder than the Left Ramp, but that's prolly cuz of the extreme left->right lean on my machine... Right Lane if In The Paint is lit, starts In The Paint in the Basket area. Otherwise, starts the Tip Off Combo and feeds the bumpers. "Minor" shots / areas:

Left Saucer like the one on T2 and NF. Gives one of Bob's Crazy Stadium Goodies when lit. Gives Extra Ball when lit. For me this is the "hardest" shot in the game. Lane-Between-Center-Ramp-And-Right-Ramp where balls come out of the bumpers. Go up this lane to get a cool "electromechanical" sound, and hopefully get some bumpers. Inlanes light the opposing In The Paint shot, most of the time. Inbounds Pass targets two standups below the Right Lane entrance (a la Johnny) that, when both hit, light Inbounds Pass at the Left Outlane. This works regardless of mode except that I think in multiballs if you light this, then use it (I hate using up ballsavers in MB), you can't light it again until you're back to one ball. Inbounds Pass returns the ball from the plunger. If you lose the ball and the inbounds pass is lit, you will lose it at the next ball.

Million Dollar Shot on ball 3 or after final extra ball, the right outlane is lit for this. If you drain down the right, another ball launches and you have ~10 seconds to hit the basket from the center ramp. Note: there is no compensation if hit the ramp, but miss the basket. If you make the shot, you win a million dollars and your game continues. If you don't make it, you're obviously not even good enough to be a ball-boy, so your game ends. If MDS is lit and you awarded an extra ball, then it will go off and relight at the next ball. 3-P-T three standups in a lovely shade of purple. When all are hit, 3-point basket is lit at Left and Center Ramps. You will never aim for these. Basket a hoop that is fed by the Center Ramp (always), the Top Saucers (always), and the Left Ramp (sometimes). Most of your points come from hitting the Basket. Sometimes the shots that are supposed to feed the Basket miss; there is compensation for this, see below. After a Basket, the ball heads for the bumper area, where hopefully it will hit some of them before dribbling out to the flippers. There's a magnet below the Basket that can hold the ball. If the Basket is not lit for anything else, it's lit for a Free Throw and 1 point. 10 Free Throws light an Extra Ball (see below). Settings are vary and each machine is different. For my machine, it is after 3rd or 5th three throw. You can only use this method once (1) per game.

Four Top Saucers an arc of four saucers beneath the Basket. When the ball lands in one of these, it is shot up a wireform and into the Basket. Except when you're in In The Paint mode, where you have a plastic guard that can block your shot to contend with, and so you can pass left or right (to another saucer) with the flippers. Bumpers 3 of 'em. They're cool-looking. Your enjoyment of NBA Fastbreak will depend amazingly much on how well these work on your machine. Backglass backglass flipper alert! There's a orange ball the size of a ping-pong ball (is it a ping-pong ball?) that can be hit with a flipper into a "basket" on the backglass. You only have control of the flipper during Pizza mode. The flipper flips by itself at various times during in the game, making a sound like Tackle from WCS. This is also what happens when you win a credit. Basket Compensation