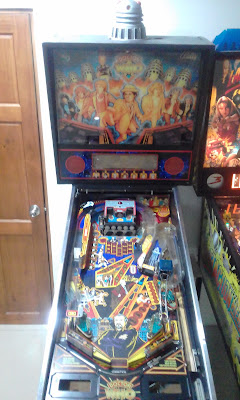 Everyone in Costa Rica that works at a call center possesses certain cognitive attributes to win an arcade game. Naturally, the CCC staff will harness and transfer that energy and high confidence to a telemarketing floor after a hot streak in the game room.

The new generation of online gamers has stated that they prefer the feel of an authentic arcade game machine setup: joystick, eye level monitor and properly spaced buttons. CCC wants to bring back the real unique arcade game experience to Costa Rica for all telemarketers verses a hand held controller game that is found on any standard flat screen TV in San Jose.

Playfield Description and Basic Rules (we'll do this from left to right):

shot at the left side of the game, just past the upper flipper - awards either the "Hang-On" or "Collision" bonuses, and depending on circumstances, "H" in "W-H-O" and/or a Sonic Boom. Scoring on Hang-On and Collision will be explained later. REPAIR targets

set of six circular targets along the left side of the main area of the playfield. They can only be shot directly from the right flipper, and are more likely to be hit on a carom shot from some other flipper. Scoring on the Repair targets is a bit weird and will be explained later. Bonus X shot Just to the left of the Time Expander area, the shot wraps around the back of the Expander to the Jet Bumpers. A Bonus X is awarded for shooting the Jet Bumpers and NOT the "Bonus X shot", so this shot doesn't do anything in particular. Time Expander

the big thing in the middle. There are three modes for the Expander: 1st - "Lock Mode" - the Expander has 2 locks, to the left and right of a circular target. Locking 2 balls leads to... 2nd - "Target Mode" also known as "Pinbot Mode" - there are 5 spherical targets, and a hit on them is registered by the red lights just below it. Completing all the lights leads to... 3rd - "Jackpot Mode" - there are 3 small gates with metal posts between them; each gate has a picture of a Dalek on it. Shooting balls through all 3 gates awards a Jackpot or Super Jackpot, depending on the situation. "Hole"

(for lack of a better word) nothing big, just a hole between the Expander and the Transmat target with which you can shoot the Jet Bumpers with the upper flipper. This will award a Bonus X, so it's equivalent to shooting the "Bonus X shot". Transmat target

when lit (by hitting the Jet Bumpers enough times), it will spot a Doctor and award points (usually somewhere near 1M, 75OK minimum). If not lit, just awards the points. Either way, it creates rather annoying flashing lights and sound. May also generate a Cow - more later. Loop Ramp

aka "Cliffhanger Ramp" - shot by the upper flipper, it awards a loop (every 1O loops yields a Sonic Boom round), and increases the Playfield X by one value (from, say, 2X to 2.5X). If the Playfield X is at its maximum (4X), the Loop Ramp awards 25OK instead (yes, 25OK... times 4 it's a million). Also completes "W-H-O" when lit, and awards a Sonic Boom (also ending the Boom Round) if lit for that. At the end of the Loop Ramp is a diverter which sends the ball either back to the upper flipper or all the way to the lower left flipper. Jet Bumpers

each hit increases the Transmat value by 5OK and awards some hokey and unimportant number of points. The ball can leave the Jet Bumpers through the "Hole" or it will enter the... Police Box entryway

if lit (by completing "Escape"), will begin Video Mode. Also always spots a letter on Escape. Either way, the ball comes out through the Police Box to the right flipper. Right Ramp

will award the letter "W" in W-H-O anytime when hit; this value, as is the value of the "H" and "O" shots (only lit after "W" is shot first), is the highest flashing value beneath the ramp (up to 3M). Will also award a Sonic Boom if lit. ESCAPE targets

completing all six targets lights Video Mode at the Police Box entryway, and also the value just below the targets (up to 3M, also awards Special when lit). Escape gets one letter spotted when the entryway is shot. Slingshots

yawn... well there are two of them, same as always. Flippers

three, the normal two plus the upper flipper positioned at the bottom of the Hang-On target. Generally used to aim the ball, though beginners may tend to flail randomly... Outlanes and Center Drain the Drain is a lot larger than some games, though the only shots which result in a center drain are shots at the Time Expander and the REPAIR targets. The outlanes are also cruel - no kickback, no rubber posts. The inlane/outlane divider is also quite a bit lower (nearly halfway down the slingshot) than most games, which leads to even more outlane drains. More bad news: the flippers are high above the drain hole, so Death Saves are more difficult. The Doctors, and more specific rules:

There are 7 Doctors, as one can plainly see from the backglass... quite conveniently, they are numbered 1-7. Each Doctor has the effect of changing the rules of one area of the Playfield, making a list of the rules all the more annoying and probably confusing.

First some general information about the Doctors... there are many ways to "spot" doctors throughout the game - one is awarded at the start of any ball, and can be spotted through the Transmat target or Video Mode. At the start of a ball (or when a ball has been locked), you get to choose the "current" doctor - his picture will flash on the backglass. When a doctor- spotting shot is made, the current doctor will become solidly lit (so his attributes are carried over for the rest of the game), and the "current" doctor becomes the previously unlit doctor directly to the left of the previous one.

There are 2 ways to spot all seven doctors - either go through them all one-by-one, or shoot the Emperor Daleks jackpot. Either way, all of them will be lit for the rest of the game, and you receive an additional bonus of 2OM, as well as a small animation, which plays even after a tilt! After all 7 doctors are spotted, they can be spotted a second (third, etc) time, and running through all 7 a second time awards another 2OM bonus. Also, each doctor spotted in the game (this count may be more than 7) is worth a 1M bonus at the end of the last ball (so don't tilt it!), and this bonus (unlike the regular bonus) is multiplied by the Playfield X.

It's best to go through all the Doctors one by one and describe what each does to the game.

All Doc 1 does is award an extra letter to "Escape" on the lower right each time an Escape shot is made, either by shooting the targets directly or shooting into the Police Box Entryway. When shooting the Entryway, two Escape letters are spotted instead of just one (specifically the two highest, but who cares?), and when shooting the targets directly, the lowest letter is spotted, along with any you happened to get with the shot itself. Each time "Escape" is completed, it yields the highest flashing award just below the letters (which usually begins at 1M, some settings 5OOK), and advances the value to the next level. There probably is a timer, but if there is one, it is a very slow one. After awarding 3M on "Escape", the Special will be lit on the targets. Just shoot "Escape" one more time to claim the credit.