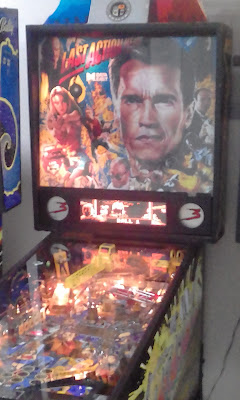 Our new video arcade room has given CCC another strong gust of wind in our sails. Costa Rica's Call Center will continue to reward our amazing staff by a pace of 1 new arcade machine per 44 new telemarketing agents hired and hitting their monthly quota.

The employee friendly call center environment became more pleasurable immediately which can offset a demanding telemarketing career. Any BPO boss could only imagine and wish for laughter, smiles, spirited jokes and high energy at their Costa Rican office on a Monday morning before shift.

The reality today is that CCC has become the only call center to have gifted their entire staff a video arcade game room to have fun, period. All agents are given the option to arrive early to play the games or they may choose to stay inside and enjoy the machines during the evening while waiting for their ride to safely take them home.

An automatic plunger in the shape of a pistol. Smart Missile

This is a button located just above the pistol. Hitting it will award whatever is lit on the playfield. (Cannot be used for Skill Shot) The location of the Smart Missile is a real pain to try to hit in a hurry. The best thing to do is use the "Buddy System." :-) Flippers

The only two flippers in the game, in the normal place. Slingshots

Both inlanes light the captive balls for 2X towards lighting multiball. Outlanes Will award special when lit, and deactivate the Smart Missile. Left Captive Ball Located just above the left outlane. Will advance MBALL and reset the timer of any mode currently running. CRANE Targets Actual drop targets that are used during various rounds. Located along the left side of the machine. (One for each letter in CRANE) Danger Bar

This is a place above the CRANE targets that holds balls locked for successfully spelling CRANE and hitting the Crane shot. Two balls maximum can be locked at one time. When M-Ball is started, any locked balls for that player are returned, via habitrail, to the left flipper. The machine keeps track of how many balls each player has locked, so it is possible to have "virtual" locks if the Crane is broken or another player starts M-Ball before you. Also called the Tar Pit. Ramp Entrance

The only ramp in the game, often referred to as THE ROOF. Used during various Dynamite Features, scores normal and Super Jackpots and to advance progress towards 'Second Cousin Franks' award. Located in the top left corner. The ramp has a large sweet spot, and the ball can be diverted to a habitrail to return to the left or right flipper. CAT Target

A red target located on the right post of the ramp. Only used during CAT Millions dynamite feature. Crane Shot

Located just to the right of the ramp, this is a passage that will lead to a VUK kickout and return the ball, via a habitrail, to the right flipper. During certain times, the crane will be in position to catch a ball kicked out from here. A ball not hit hard enough will fall into one of the Double-Your-Bonus rollovers. Double-Your-Bonus Rollovers Like Advance X on most machines, completing these three rollovers will double your current bonus that is awarded at the end of your ball. (Max of 50M)

Three pop bumpers in the normal triangular arrangement. Located at the top of the machine underneath the Double-Your-Bonus rollovers. They advance the currently flashing Dynamite Feature. Movie Screen

Scoop located in the upper middle of the playfield, just underneath the pop bumpers. When the yellow light is lit or flashing, it will award the current Dynamite Feature. Also used during some Dynamite features and to start M-Ball. Lt. Dekker Spinner A spinner target located between the movie screen scoop and the Chicken Scoop. A ball going through the spinner will immediately enter the pop bumpers. Chicken Scoop

Located to the right of the spinner. Used to "Play Chicken" and during some Dynamite Features. The ball can returned to the Chicken scoop via a small lane out of the pop bumpers right beside the Ripper kickout. (See below) A ball hit into the Chicken scoop will be returned from the Movie Scoop. Ripper

A Kickout like the Raptor pit in JP. Hitting the Ripper will return the ball to the flippers at about the speed of light. A ball draining shortly after a Ripper shot will be replunged. Also spots a letter in RIPPER. Right Captive Ball Captive ball to the right of the Ripper. Advances toward M-Ball and used during "Go to the Movies". Eyeball Targets Three targets on the upper right side of the machine, just to the right and underneath the Right Captive Ball. Hitting all three will light another 5M badge on the playfield, and will also award a "Benedict's Bonus". Wildcard Scoop

A scoop on the right just above the right outlane. Awards WildCard, Extra Ball when lit, and sets the Dynamite feature to one of "Last", "Action", or "Hero". 5M Badges Badges lit on the playfield at the entrances to certain shots. There locations are: The left captive ball, the Crane, The Ripper, and the Wildcard Scoop. These shots must also be hit during the 6-Ball sequence. Dynamite Features Like most other games these days, LAH has a series of modes to complete. These are the lights just above the flippers. Steady lit lights indicate that the feature has been completed. The flashing feature is the next feature to be awarded after a shot to the movie scoop. The pop bumpers change the current award. RIPPER Lights

Yes, LAH does have magnets underneath the playfield, right below the Dynamite Features. The eye of the pyramid below the Movie Scoop will be lit (or blinking) when the magnets are activated. The magnets are in a triangular shape similar to TAF. Shaker Motor At various times during the game, a shaker motor will be activated to vibrate the machine for a pretty neat effect. (It's identical to the one in JP.) It comes on whenever the ball enters the pop bumpers, and when various rounds are in progress. Skill Shot

The skill shot on LAH is identical to the one on LW3. A red light underneath each of the CRANE targets will will flash in sequence. You must plunge the ball so the ball will knock down the currently lit target. It awards: Ball 1 : 2M Ball 2 : 3M Ball 3 : 4M Instant Info

Holding either flipper button for awhile will show you Instant Info. This will list the replay value, number of extra balls earned, current bonus, Second Cousin Frank's award value, Last Action Hero award value, World Premier award value, as well as the High Score table. You can page through the display by hitting the other flipper.

Ball Saver Last Action Hero has a ball saver that is active during the first few seconds of a ball being plunged. If you get an outlane drain immediately after hitting the CRANE targets, the ball will be returned. If the replunged ball again drains after hitting the CRANE targets, it will be replunged once again. After this, your on your own. The ball saver will also be active after a shot to The Ripper, the first few seconds of M-Ball and the first moments of Super Crane and 6 ball. "Don't Move!" NOTE: One newer ROM's, the machine will supposedly forgive many right outlane insta-drains.

Dynamite Features A few notes about the Dynamite features before I actually start explaining them: The Movie Scoop will be lit to award a feature at the start of each ball. After it's collected, the ramp will relite the scoop. Going through either inlane will lit the movie scoop for a VERY limited amount of time. You can have various modes running at the same time, but there are some exceptions that will be noted below. As far as I can tell, the Smart Missile does NOT award the currently flashing Dynamite Feature. (It lights the scoop for M-Ball) Using the Smart Missile will automatically light M-Ball at the movie scoop. If M-Ball is lit, M-Ball will be started. When M-Ball is ready at the Movie Scoop, Dynamite Features (obviously) cannot be collected. During any kind of timed round, hitting the Left Captive Ball will reset the timer back to it's maximum value. This can only be used once per round.

Hitting an inlane during most Dynamite Features will lite the Wildcard scoop. Hitting the scoop before it times out will double the current scoring for whatever round is going on. This can be VERY worthwhile on some rounds. (It does not work for every Dynamite Feature.) The World Premier Award (and I think the Last Action Hero Award) are increased in the following way: Every round you successfully complete will add 5M to the World Premier/LAH awards and 5 seconds to your World Premier time. (See sections on World Premier and LAH for a full explanation of these 2 rounds.) Round Completion will be specified for each Dynamite Feature. The Dynamite Features are: (In no particular order)

Blow Out Light Extra Ball Go to the Movies Red Eye The Roof Big Mistake Cat Millions Super Crane Save Danny Find Benedict "Last" "Action" "Hero" *World Premier* (Can be collected after all other Dynamite Features are cleared) Light Extra Ball is obvious - once lit, it can be collected at the Wildcard scoop. The other rounds will be described in detail.

Blow Out This is a frenzy round in the tradition of TZ's Town Square Madness or JP's Stampede. You start at a base score of 6M, and the target value starts at 250K. Every 10 target hits raises the target value by 50K. The points are awarded immediatly. A typical Blow Out score will be 17-20M. A ball that spends a lot of time in the pop bumpers will net a Blow out Score of around 20-30M. Blow out lasts for 20 seconds.