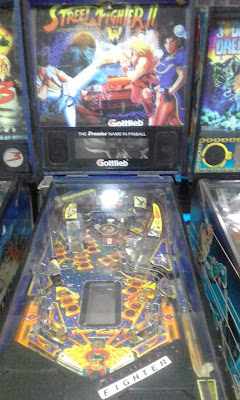 A smart motivational technique used for CCC BPO agents is to compete on the machines in the game room.

One way in which a telemarketer's confidence could be made stronger or broken down is through an arcade experience during their work day. Costa Ricans have courage and can back up their swagger on the phone after dominating the video games during their scheduled breaks. In the competitive offshore outsourcing call center arena, CCC has an advantage over the rest in Costa Rica by creating a strategic play environment.

High end arcade video games will reinforce a call center agent's focus, mind set to win and motor skills while off of the phones during their free time. The most important virtue is to show a solid habit of good sportsmanship regardless of the outcome of the games in the arcade. More new friendships have blossomed in the game room at CCC call center Costa Rica.

This is a glossary of the shots that will be referred to during the discussion of the game. In SFII, most shots correspond to one or two of the opponents that you must defeat through the course of the game. There are only 8 shots for 12 opponents, as the lower right sink hole and the spiral each have two opponents, and the left and right ramps can be raised and lowered, with one opponent for each ramp position.

- Lower Left sink hole. This is the opponent E.Honda. When the opponent is not lit, this hole spots a letter in TORPEDO. Completing TORPEDO starts TORPEDO Multiball.

- Lower Right sink hole. This hole has two opponents: M. Bison and Balrog. When neither of the opponents are lit, then the hole spots 1 letter in TORPEDO until the first TORPEDO multiball is achieved, and scores 1M + 1M to ??, and resets on each ball.

- Left lane, just past top flipper: This hole is the opponent Blanka. When the opponent is not lit, it advances the Car Crunch value. On our machine you need 3 hits to get the Car Crunch, but this is probably either a self-adjusting value or operator settable.

- Left ramp. This is the opponent Zangief. The left ramp can be raised, in which case refer to the "left underpass" described below. When the opponent is not lit, and the ramp is in the lowered position, this shot scores 3M. Any ball shot up this ramp is kicked out of the E.Honda hole. You can also get Zangief by shooting Sagat just as multiball ends if Zangief is lit (bug or feature?). Shooting an unlit Zangief raises the ramp for a shot at an unlit Sagat.

- Left underpass: This is the opponent Sagat. This shot is only active when the left ramp is in the raised position. When the opponent is not lit, this shot is worth 4M, and kicks 1 barrel. Kick 4 barrels to start Multiball. Any ball shot through this underpass is kicked out of the E.Honda hole.

- Left sinkhole, just to right of left ramp. This is the opponent Dhalsim. When the opponent is not lit, then this shot scores the flame, which is 2M. Any ball shot into this sinkhole is kicked out of the E.Honda hole.

- Vertical loopback, just to right of pop bumper. This is the opponent Guile, one of the toughest shots in the game because it has a very small sweet spot. This shot loops the ball up vertically onto a habitrail which drops the ball into the right inlane. When this opponent is not lit, it spots a letter in GUILE. Spelling GUILE the first time gives and extra ball (or 50M if extra-balls are disabled), and scores 50M for each completion of the GUILE. Although the shot is obviously made for the left flipper, it is possible to hit this shot backhanded from the right flipper. I have done the backhand several times while the ball was heading towards the right flipper from the left side of the playfield, but only once when the ball was at rest on the right flipper.

- Spiral in upper right corner: This shot has 2 opponents: Ken and Ryu. It is designed to be hit from the upper left flipper only, although a ball from the right flipper which hits a post just above E.Honda may ricochet into the spiral. I've done this a few times, but never intentionally. Although both opponents light up together, each shot when it is lit scores only one of the two opponents. When not lit, this scores 1M+1M per loop. A good shot might give you 3 or 4 loops, but usually you'll only get 1 or 2 loops. The value continues to increase across balls. Any ball shot in the spiral is kicked out of the M.Bison hole.

- Right ramp: This shot is the opponent Chun Li. Like the left ramp, this shot is only active when the ramp is in the lower position. A shot up this ramp sends the ball to a raised playfield, which has a single flipper that is rotating at constant speed (you have no control of this flipper). If the flipper does not hit the ball, then your ball goes straight to a habitrail on the left, which drops the ball into the left inlane, and you score either Chun Li when it is lit, or 5M+5M to 25M if not lit, which resets on each ball. Note that after you get an unlit Chun-li, you have one shot from the left flipper to get the next ramp. If you hit any other switch, the ramp raises, and gives you a shot at an unlit Vega. If the rotating flipper does hit the ball, then it either sends it back down the ramp, or onto the right habitrail, which drops the ball into the right inlane. In this case, no points, touch bananas, zilch, and the machine laughs at you! Hidden discovery: you can also get Chun Li by shooting Vega just as Multiball ends when Chun Li is lit (bug or feature?).

- Right underpass: This is the opponent Vega. This shot is only active when the right ramp is raised. When the opponent is not lit, this shot scores a random award. Some of the possibilities include points (5-25M), light extra ball, start regular multiball, and spot letters in 1 to all letters in GUILE, TORPEDO, or FIGHTER. There may be other awards too. If you hit the unlit Vega when the DOUBLE light is on, then it gives you TWO separate random awards. This shot sends the ball to an eject hole which feeds the top pop bumper. During normal play, the ramp can be raised for a random unlit vega award in two ways: 1) Hit an unlit Chun-Li, or 2) have the ball land into the Vega eject hold by going through the green targets (usually a lucky bounce off the Jet Bumpers). If the right ramp is stuck in the up position, then the right underpass will give you credit for Chun-Li when lit, otherwise it will give you a random award every time.