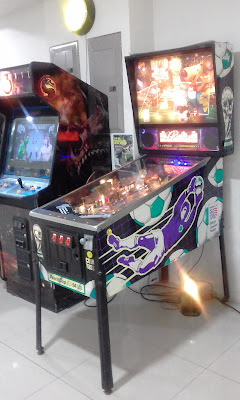 Our entire staff has concluded that an immediate visual stimulation combined with a conditioned manual stimulation in gaming added a very special ingredient to our nuance at CCC. To date, Costa Rica's Call Center is the only BPO in Central America with a retro arcade game room, period.

The average age of our Costa Rican call center agents correspond with the virtual gaming boom. Every CCC agent that grew up mastering Nintendo has amazing skills and a strategic thought process.

Left Outlane Has a kickback which is relit by hitting Light Kickback Target. Left Inlane

Has a rollover which lights the Light Magna-Save target. Magna-Save

Ah yes! The return of the Magna-Save. But not quite the same implementation as in Black Knight or Jungle Lord or the other 70s Williams two-levels. The Magna-Save is just above the tip of the left flipper, and is set to save a STDM drain. By punching an extra button at the left, you activate the Magna-Save which sucks the ball into place above your flipper so you can catch it. At least thats the theory. Slingshots

The return of the standard slingshot, no more of this trapezoid shaped junk like Demo Man or ST:TNG. Light Kickback Target This is lit by rolling through the right inlane. Hitting it lights the kickback. Left Spiral

This is your standard spiral. When a city is lit, it scores the city and sends the ball all the way around and shooting out the other side. Otherwise a one-way gate drops down and the ball falls into the rollovers / pop bumpers. Left Ramp

This ramp normally shoots the ball around in a loop and back to the right flipper. If you hit a second consecutive ramp shot, a diverter closes and sends the ball over to the left flipper. The left side of the ramp holds the locking mechanism, implemented here in excellent fashion. If lock is lit, the ball always goes to the left ramp lock area from either ramp. I should also note that around the spot where the ramp is about to curve back towards the right flipper, there is a little hole so that if you don't shoot your ball strongly enough, your ball will fall down into the pop bumpers without scoring the ramp. The ramps are used to lock balls, collect tickets, relight jackpots, and for points during Ultra Ramps. Striker Targets

Striker is this little dog who is the mascot of World Cup Soccer and he has three standup targets on the game. One on each side of the left ramp, and one in front of the jet bumpers at the upper right. Hitting a dog target lights a letter in the word "STRIKER." When you light all seven letters, you get 10M and the Striker Scoop is lit. Light Free Kick This is a saucer. Falling in it lights the Free Kick standup target. Tackles

This is a row of three standup targets (think about Cousin It / Superdog and you get the idea.) Hitting one of them when lit scores 10M. Assist Another saucer, at the upper left, just in front of the goal. When the ball falls into the Assist saucer your goal gets lit (or nothing changes if its already lit) and you can shoot the ball straight in by punching a flipper. Pretty great. Star Rollovers There are four rollovers (yes rollovers!) leading towards the goal. Light a rollover by rolling over it. Light all four and goal is lit. GOAL!

This is really great. At the upper left corner of the playfield there's this wide hole (picture ST:TNG's Neutral Zone if it was as wide as all three targets.) In front of it is this plastic goalie who moves back and forth. You shoot the ball past the goalie and into the goal. Its tougher than it sounds - he's good! When you hit the goal the machine yells "GOAL!" and there's a great animation and the crowd cheers! Hitting the goal when its not lit will score the Striker Scoop award when you haven't collected a Striker award yet. 4 lit Goals lights a TV award. There are also a couple of modes which run along a theme of hitting the goalie, which I find really amusing. Goal also serves as the multiball jackpot. Striker Scoop This is a small little scoop in the back middle of the playfield, to the right of the goal. Hitting it when lit serves up a seemingly random Striker Award. This also serves as the Extra Ball shot. Jet Bumpers / Rollover Lanes Three bumpers and two lanes. Lighting both lanes lights the left spiral to collect a city. Jet Bumpers are pretty standard three-in-a-triangle-shape. During normal play, the jets are worth 1OOK a pop and add one thousand fans for each pop. At 25,OOO fans, the jet value becomes 1M / pop for the rest of the ball. Soccer Ball

Theres this great big half-a-soccer ball which spins at super speed when the goal is lit and during multiball. The thing is, the ball is made of RUBBER! This causes A) much bounciness on the upper part of the playfield and B) some pretty extreme spins on the ball. Free Kick Target When lit from one of the Free Kick saucers, this target awards 10M. It stands right in front of the spinning soccer ball. TV Award / Final Draw scoop When lit for TV award, this gives out a TV Award. There are currently four TV Awards. Also serves to start multiball when lit for Final Draw. Right Ramp

Same as left ramp, except this ramp always feeds the left flipper and there are two holes which can drop your ball to the bumpers instead of just one. Serves same purposes as left ramp. Light Free Kick saucer There is another Light Free Kick Saucer to the right of the right ramp. See above. Light Magna Save target When lit, hitting this target lights the Magna-Save. This target is lit by rolling through the left inlane. Right Inlane

Rolling through this inlane lights the Light Kickback target. Right Outlane There is a special light here, which is lit at the end of multiball (see MULTIBALL below.) Plunger / Skill Shot

First off, this game has a real plunger. You remember...you pull it back and it springs the ball out? The skill shot is like one of those loops on roller coasters. You shoot the ball up the loop, and it falls into one of three dividers which each have a light. When you start they are all flashing. Falling in one of the flashing ones the first time scores 5M. Then only two are flashing. Hitting another flashing one scores 10M. When you hit the last flashing one you spot a city for 30M! Rules GOALS For some reason, hitting goals is the funnest thing in the world. You start each ball with the goal lit (at least you do on the machine I play.) Shooting a goal scores 10M, adds 5M to fun with bonus and starts an "Ultra" round. There's some great sounds here. When the goalie blocks a kick you get "What a great save!!!" The voice reminds me a lot of the voice in Banzai Run. You relight the goal by lighting four stars on the playfield. There are two ways to light a star: A) Hitting the dog target in front of the pop bumpers (called the "Header" target) lights an unlit star B) By rolling over them! Yes, first the return of Magna-Save, now the return of rollovers! What a great game. After each goal, you are awarded an "Ultra" mode. There are four Ultra modes (explained below) and each one lasts for the length of your ball or until you score 30M on the mode, at which time you are given a 10M bonus and the mode ends. The modes you currently have lit are indicated by four lightning bolt-shaped lights on the right side of the playfield.